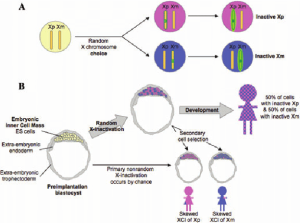 The quest for the map of human chromosomes was started in 1990. Surprisingly, the project was fully completed in May 2006. The results have already poured mounds of new information about genetics into the biology world.

For instance, one thing determined was that the X chromosome has many more genes than the Y chromosome. Due to less genetic material from their fathers, males are 6% more genetically similar to their mothers. Male twins are also slightly more identical than female twins due to less genetic information, according to Natalie Angiers, in her book Woman: An Intimate Geography.

According to the U.S. National Library of Medicine, it was determined that the Y chromosome contains about 70+ genes. The X chromosome carries about 2,500 genes, and is responsible for about 300 specific diseases, including colorblindness, prostate cancer, hemophilia, baldness, Duchenne muscular dystrophy and many mental retardations, as reported by Jai Dennison at Daily News Central, in his article, “X-Chromosome Studies Unlock Deep Mysteries About Gender Differences.” Women are less likely to suffer from these X-linked genetic diseases due to what is called X-inactivation.

When two X chromosomes come together to create a female embryo, X inactivation occurs. During X-inactivation, cells randomly chooses to “shut down” sections of its extra X chromosome to form a “mosaic” of genes.

Consequently, X-linked diseases are more common in men than women, since women have both Mom’s and Dad’s X genes to pull from. Scientists are still discerning just how “random” the X-inactivation process is. Philip Avner and Edith Heard’s article “X-Chromosome Inactivation: Counting, Choice and Initiation” discusses interesting research in this area. Similar to the reason that tortoise-shell cats can only be female, X-inactivation creates a mosaic of X-linked traits in women but not in men, who are subject their single X’s full expression.

Inheritance and the X Chromosome

In conclusion, nature appears to have a “back up plan” for women through X-inactivation, while unlucky men must suffer the full severity of X-linked diseases.